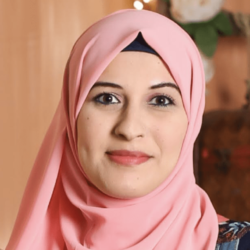 In the alleys of the “al-Shati” (the beach) Palestinian refugee camp, west of Gaza, Marah Hassouna walks around carrying a bag packed with her sportswear and scooter.

It was just a passion, one that’s usually very normal and endearing in most countries, but for a girl who lives within the Gazan society, it’s quite intriguing. Marah is always showered with critical remarks and gossip by her neighbors, in addition to the surprised looks that follow her. To be a girl who plays sports is socially frowned upon.

However, Marah goes on not caring whatsoever about what people say. She is nonchalant about the comments made on how she “skates.”

She is the first adult hijabi girl to play this sport in a conservative community that still holds fast to customs and traditions which discriminate between females and males.

Marah (20 years old) or “the one with the scooter”, as she likes to be called, wanted to achieve her dream of playing her favorite sport since she was a child. She did so despite all the challenges she faced, and in a blockaded strip where this sport is just for men.

Marah started playing her favorite sport “skating” a year ago with the support of her family, especially her father, who used to play football when he was in his twenties. He helped her to move forward with her favorite sport without letting what others say get to her, and to have success as a goal so she can achieve everything she wants.

“Skating is my whole life, and I strive to be an international skater who participates in international championships and represents Palestine in international forums. I preferred this sport over my university studies in the field of financial and business management. I don’t work in that field so I would have enough time to train on the scooter,” Marah tells Daraj.

“When I started skating, I could not even afford to buy the special shoes I need. My father is a retired government employee so I had to work for a month at a company in my field to be able to buy the shoes,” added Marah.

She also noted that she found it really difficult to finally get the scooter, due to the lack of stores that provide skating supplies, and given the absence of interest in it and its poor popularity due to the lack of places where it can be practiced.

A Veiled Girl that Skates!

In Gaza and Palestine in general, girls and women generally live under difficult conditions in the light of a continuous traditional stereotype of women and the continuing legal prejudice against them. This reality has also affected the female athletic presence, which is still considered rare.

“Society did not accept for me to be skating in the streets. For the people living in the strip, this is considered a violation of their traditions and customs. When people see me on my scooter, they start chattering (how could this adult hijabi girl skate), (she should stay at home or find a job better than this foolishness,)” Marah chuckles with a sarcastic laugh.

Marah did not pay attention to any of those comments; she considered them motivation to keep playing the sport she loves, to be an international skater, and to be honored with prizes. She decided to prove for the society that this sport is not just for men and that girls are entitled to play whatever the sport they like.

Despite her father’s approval and support, one of Marah’s brothers refused and opposed her practice of such sport in order to avoid criticism. However, she convinced him of her passion until he became one of her supporters and started accompanying her to the training.

“I face big challenges when skating; there are no places for practicing skates. I go to the football court, or any other open place to skate. Not to mention the lack of stores that provide skating supplies, and their high prices, given the absence of interest in the sport,” said Marah.

The absence of interest, especially among girls, in skating is due to the lack of courts suitable for playing this sport which is of great interest in European countries and other Arab countries, where international championships are organized like other sports, according to Marah.

Girls in the Gaza strip have watched Marah’s videos and photos skating, which have gone viral on social media, and expressed a desire to play this sport now. Still, the lack of dedicated places and the difficulty of obtaining its supplies are constraining them.

The young girl who is in her twenties is hoping that she will be able to change society’s view of females who play this sport in Gaza, so it will not discriminate between males and females. She calls for developing the interest in skating, dedicating special courts to facilitate its practice, establishing a special union for it like the unions of the other sports in the strip, and enabling girls in Gaza to practice whatever the game they like without any restrictions or abuse.

Marah’s family are her main supporters. In this context, her father, Kamel Hassouna, tells “Daraj” with a smile on his face: “When Marah told me that she liked skating and wanted to practice it, the fact that she was interested in sports made me so happy. I never opposed the idea. My wife and I encouraged her.”

He added, “When Marah started her skating journey, I helped her to overcome the negative views of people, especially in the refugee camp where we live. I also encouraged her to develop her skills in the sport she likes without caring for what’s being said about her.”