After Six Years in Captivity, She Returns… the Yazidis’ struggle with ISIS 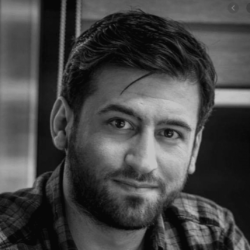 Maher was able to have his eldest son back and treated him out of ISIS’ influence. The boy was reintegrated into the community to which he belonged. However, it seems that Maher will now have to go through another similar experience. This time, his mission will be to reunite his entire family and introduce his children to their mother and brother.

About a year ago, while Daraj was conducting an investigation on Yazidi children, Maher Mahmoud, a Yazidi young man, spoke to us saying: “I lost 17 members of my family, including my wife and three of my children, and we only liberated two children, while communication with the others was cut off, which has increased our pain intensely.”

The tragedy of Maher and many other Yazidi families has been ongoing since the first day of the ISIS attack on their region in Iraqi Kurdistan. Now, at long last, Maher informed Daraj that he managed to reach his wife, Sahirah (25 years old), and his son Hewan (7 years old), as it turned out that she was staying with a group of ISIS families inside Al-Hawl camp in the countryside of Hasakah which is governed by Autonomous Administration of North and East Syria (NES).

The camp houses more than 70,000 people from the families of ISIS militants. According to a woman from inside the camp, who preferred not to be named, the camp is more like an integrated city. Maher recounts his research plan to liberate his wife from the camp, saying: “With the help of some sources inside Al-Hawl camp in the Syrian countryside of Hasakah, we obtained information that my wife and my son Hewan are inside the camp.” The young Yazidi continues: “At first, we were not sure that she was my wife. What was certain is that she was a Yazidi woman, so we looked for a way to liberate her, regardless of whether she was my wife or not. Later, it was confirmed that she was my wife, as a source from inside the camp sent us a photo of her and said that she was with her son. Hence, we started another phase of finding a way to get her out safely, as she was living among a group of Syrian ISIS families.”

Maher confirmed that fear is the reason why his wife did not reveal her Yazidi identity. “She was afraid to admit to anyone that she was Yazidi, especially since she was living among a group of families belonging to ISIS, and in an atmosphere of brainwashing. The camp residents have also been intimidated that if they reveal to the administration that they were Yazidis, returning to their families would mean facing an unknown fate. This obstacle prevented her from turning herself in to the camp administration and revealing her Yazidi identity.” It should be noted that Maher has not yet met his wife and has not been able to verify the reasons for her staying in the camp and not trying to return despite the long time that has passed since the defeat of ISIS. Observers believe that dozens, perhaps hundreds, of Yazidi women and their children who were captivated by the group, are reluctant to return because of their conviction of the group’s ideology. Many sources inside and outside the camp confirmed that “many Yazidis used fake names and identities from the moment they entered the camp. This was due to one of two reasons; the first is being brainwashed by ISIS and convinced to adopt the terrorist group ideology, and the other is fear, either from being targeted by the ISIS families inside the camp or the uncertain fate ISIS told them they would face if they ever returned to their families.”

“Sources” Are the Way to Freedom

The official page of the Yazidi House in Al-Jazirah region continuously posts photos and information about Yazidi girls and children who were rescued from Al-Hawl camp in Al-Hasakah.

When asked about the mechanism of identifying and taking them out of the camp, Farouk Tozo, the co-president of the Yazidi House in Al-Jazirah region, told Daraj that: “We usually reach Yazidi women or children through special resources cooperating with the Yazidi House’s committee on liberating the captives.”

“She was afraid to admit to anyone that she was Yazidi, especially because she was living among a group of families belonging to ISIS, and in an atmosphere where brainwashing was everywhere.”

Regarding the process of rescuing Sahirah and her son, Tozo said: “About Sahirah and her son, the committee responsible for liberating the captives got some information from her husband, Maher. After following and verifying this information, we were able to reach her and pick her up from the al-Hawl camp administration. She and her son were staying at a tent in a camp dedicated to the Syrian families of the terrorist ISIS group.”

According to the figures announced by officials from the Yazidi House to the press, 150 Yazidi girls and children were rescued from the camp based on information from sources inside the camp.

“My Own Son Didn’t Recognize Me!”

Maher Mahmoud said: “Like his brother Bewan, my son Hewan does not know a single Kurdish word. He did not even recognize me when I talked to him for the first time in 6 years, and it seems like I will have to go through the same experience I had with my son Bewan.”

In his interview with Daraj about a year ago, Maher explained that he had trouble dealing with his son Bewan, saying: “We had a hard time trying to interact with him, ISIS planted their ideas in my son’s head to the extent that he forgot his own -Kurdish- language and our religious teachings, and he talks to us as if he were an ISIS member.”

Maher managed to have his eldest son, Bewan, back and treated him from ISIS’ influence. The boy was reintegrated into the community to which he belonged. However, it seems like Maher will now have to go through a similar experience. This time, his mission will be to reunite his entire family and introduce the children to their mother and brother. Maher, who did not balk at posting old and new photos of his wife and child celebrating their return, said: “I am now waiting for the procedures to be finalized, so I can meet my wife and child whom I missed for six years. All I care about now is bringing my family together and trying to forget everything that happened.” This is only a part of one of the many tragic stories the Yazidi families are going through after being kidnapped by ISIS and distributed to the areas under their control during the past years. There is more to the story that we will know about from Sahirah, who could not speak about her experience and is still in shock, and from her Yazidi peers who are still ISIS captives.