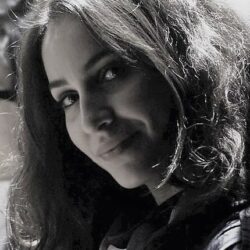 After streaming a video on her Facebook page revealing the extortion she faced at “Syria TV,” the Syrian journalist Maha Ghazal shared her story, and announced that she would go on with her battle to win her rights back, especially after reading the impassive statement by “Syria TV,” and the disappointing responses by “Fadaat”…

“I used to google my name every 10 minutes to find out if my photos and private conversations had been leaked. I was emotionally depleted and had to bear with anger, anxiety, and shock because I did not figure out why I was going through this. Due to the extortion I encountered that pushed me to quit my job, I was admitted to the intensive care unit, for a whole week, where I remained restricted, speechless, and incapable of interaction. I spent the last weeks waiting for the outcomes of talks and friends’ mediators with the high-ranking people on the board of directors between Turkey and Qatar.”

With these words, Maha Ghazal, the Syrian journalist and (former) manager of production quality in “Syria TV” described to Daraj what she had suffered after discovering that her personal accounts were hacked at the command of the managing and financial director in a meeting held last month and in the presence of Malek Daghestani, “Syria TV”’s General Manager in an attempt to force her to resign. Behind this plot was the same managing and financial director who gave the order to hack Maha’s accounts and blackmailed her through private photos and information shared in case she refuses to resign.

This threat had been repeated on social media more than once. It even extended to impersonating Maha’s close friends and frequent attempts to hack her accounts in order to make her feel like she was completely trapped, and the only way out would be to resign as the managing and financial director wishes.

“I did not understand why this was happening to me? What was this dirty war for? Why is this harmful way being adopted if the aim was only to fire me? I truly find no reason to justify this attack on me,” inquired Maha in her interview with Daraj.

“I sympathize with a lot of women and female workers, especially refugee women, who hesitate before sharing with people what they’re being exposed to. Today, I have discovered that safety means to share, not to remain silent.”

Weeks after Maha’s meeting with the managing and financial director, she learned from other colleagues who attended an internal meeting in the institution after her dismissal decision was made and calling the one accused of hacking her privacy to resign, and the latter has officially confessed that he gave the order of hacking and possessing valuable and private information of her personal life.

Maha assured Daraj that “most of her colleagues have supported her, disregarding the details or the photos the hacker intended to exploit to embarrass her. She said that neither the employees nor Malek Daghestani, the General Manager cared about the content of the photos and conversations; as the main principle here is that no one has the right to violate an employee’s privacy, especially women who are easy to extort and exploit their behavior and personal lives.

Maha has already received numerous supportive responses from many organizations as the Syrian Women’s Political Movement, the Syrian Feminist Lobby, the Syrian Women’s Network‎, and the Syrian Journalists Club. In this context, “Daraj” tried to reach the Syrian journalist and General Secretary of “Arab Media House”, Omar Koush, to figure the house attitude towards what happened with Maha, but no comment in this regard was received.

Maha Ghazal’s Dismissal and Malik Dagastani’s Resignation … But What About the Violator?

Hence, thousands have reacted to the video Maha has filmed directly from the Turkey-based Syria TV station, and was streamed on her Facebook page on Thursday 16th July after her final meeting with Malek Daghestani, the General Manager who was a great supporter to her and aimed to defend her from the moment he discovered the ongoing extortion during the meeting he attended and in which Maha was threatened of exposing personal information in case she did not resign, according to what Maha told Daraj

By going further into details, Maha said that the day when she streamed the video, she was just coming out of a meeting with Dagestani, during which he told her that the case is not going well in her favor, despite everybody’s disapproval, including the Qatari “Fadaat” responsible for the channel, of the breach act committed against her. Dagestani also told her that nothing shows that what she sought after to achieve justice and to enhance her sense of security will be fulfilled. The day after his meeting with Maha, Dagestani subsequently announced his resignation from his position during a public meeting held with the employees of the institution. He justified his decision by saying it was a refusal to continue his work while he is unable to protect an employee, and to keep her work which she was arbitrarily dismissed from without any prior warning or ensuring that those who breached her privacy are held accountable.

The shock of extortion had led Maha to go to the hospital. However, the irony was that Maha was kept away from her work waiting the outcomes of investigations, instead of keeping the accused person and the violator away from the workplace, and the space which the administration was supposed to strive to make secure for Maha and other employees, rather than merely using the clichés and theoretical expressions about its belief in equality and its rejection of differentiation practices.

The negotiation which friends have mediated to hold with the administration of “Fadaat” did not lead to equitable outcomes. Moreover, it appears that the Fadaat administration has made the life of the perpetrator of extortion a lot easier by securing a dignified resignation for him, whose fate is yet to be known. Besides, it has ignored a series of intuitive measures, such as compelling the violator to sign a pledge not to publish the personal information that he seized even after destroying it, bearing in mind that “Syria TV” administration publicly acknowledged the breach in a statement issued on Friday, July 17, claiming that it had dealt with Maha’s complaint with the necessary seriousness and firmness through conducting a comprehensive investigation that contributed to the breach disclosure and punishing its perpetrator.

But soon, the administration erased the effect of that admission by resorting to the traditional male tactic, in a later paragraph, represented in re-throwing the victim into the accusation line. This time the choice is made on the charge that the victim has exploited the incident to “cover up” some “misbehaviors”, “abuses” and “defamation” at work, so the administration had reserved the right to pursue the matter judicially.

For Maha, the administration’s statement is inaccurate because she did not file a complaint in the first place. Instead, she waited for the administration to take some steps to do justice to her for weeks. Thus, Maha was surprised by being accused of abuses, and she was the one who was never accused of any misbehaviour during the four years of her employment in television channel, rather she was promoted to the director of production quality, according to Maha.

Maha is asking, “Why do they threaten to go to court? Is a woman supposed to stay silent about the violations that she was subjected to?”

As is the case in most extortion violations, the responses are divided into supportive and opposed responses, or evasive ones that either do not express their position clearly, or search between the lines of the story about what makes the complainant an object that does not rise completely to the level of the ideal victim.

Maha is not the first woman to face extortion or receive eager responses to sow doubt in her story or to scare her of bleak professional future, in private and public workplaces and in the world of relationships and the business. Nevertheless, Maha really wanted to be the last one, so she publically shared what she went through, because she realized that these practices have affected numerous women and may affect many others due to the social, legal and professional discrimination practiced against them. What Facebook allowed to Maha was not enough for her, but she was lodging personal lawsuit before the Turkish judiciary, based on the material of threats, extortion and breaches of privacy, and she is working hard in this regard to confront the decision of dismissing her arbitrarily and depriving her of her job unjustly.

“Before the video streaming, I was afraid of leaking my photos and my personal data. But as soon as I had published my story and received supportive and sympathetic messages, I felt that I am more prepared for confrontation and less susceptible to extortion. I felt safe, because people showed solidarity with a moral issue in the first place, not personally with me as “Maha.”, she said.

Maha concludes by saying, “I sympathize with a lot of women and female workers, especially the refugee women, who hesitate before sharing with people what they are being exposed to. Today, I have discovered that safety means to share, not to stay in the shadow.”