Syria: Waiting for Bread in Crowded Queues Amidst Corona 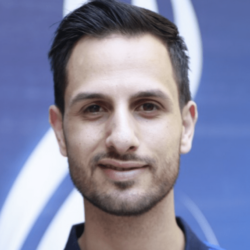 As winter has arrived, Syria is facing a second wave. Across the country the number of corona cases is on the rise. Most people, however, have other things to worry about.

“We want to live, and nothing will befall us except what God decrees,” said a man in the crowded Baramkeh district of Damascus waiting for a bus to the town of Jdeidat Artouz southwest of the Syrian capital. That was his answer when asked about preventive coronavirus measures.

What concerned him most among the rushing crowds was to find a seat. Damascus has been facing a stifling transportation crisis off late. Due to a shortage of diesel and gasoline there are fewer minibuses, while ticket prices have doubled.

If you tour the streets of Damascus, you will hardly see any people wearing face masks. To make things worse, public transport is overcrowded, while there is an overall lack of social distancing and adherence to other preventive measures.

Facebook pages are filled with the obituaries of citizens and doctors who died due to the pandemic. Barely a day passes without someone commenting on a post to offer condolences.

According to data issued by the Syrian Ministry of Health, the total number of coronavirus infections by December 27, 2020, reached 11,033, of which 5,141 were cured, while 678 people died.

The government team concerned with taking coronavirus measures in areas controlled by the Syrian government has made wearing masks mandatory in public institutions, public transport, bakeries and markets. Yet, it seems a policy impossible to implement due to the lack of government control.

Damascus’ public bakeries, including the Sheikh al-Saad in Mezzeh and the Ibn al-Ameed bakeries in Rukn al-Din, are still overcrowded. The same is true for the entrance of Syrian Trade Establishment, where people obtain subsidized food, such as rice and sugar, via an electronic card. Indeed, queues of all kinds have become the new normal.

“What really concerns people in Damascus is securing their basic needs, much more than the risk of contracting the virus, especially in the light of the stifling economic crisis and the high cost of living amidst the prevalence of poverty and begging,” says Sanaa, a resident of the Mezzeh neighborhood.

Although billboards explaining the dangers of the coronavirus have been widely spread under the auspices of the Ministries of Health and Information in cooperation with international organizations, they fail to attract the attention of most passers-by. They certainly fail to impress the many children who roam the streets for money and search garbage cans for something to eat.

In November, Syria experienced a second wave in the pandemic. The official number of registered cases reached 150, according to the Ministry of Health. However, the real number of infections and deaths is arguably far higher due to the laxity in observing safety measures.

In addition, schools and colleges continue to be open, despite the calls of families and doctors to suspend education, especially following the death of a student in Reef Damascus and the deaths of eight teachers and educational staff in other governorates.

According to Dr. Hutton al-Tawashi, Director of School Health at the Ministry of Education, there are more than 600 infections among students and 800 positive cases among school staff. Nevertheless, the appeals to suspend education seem to fall on deaf ears. 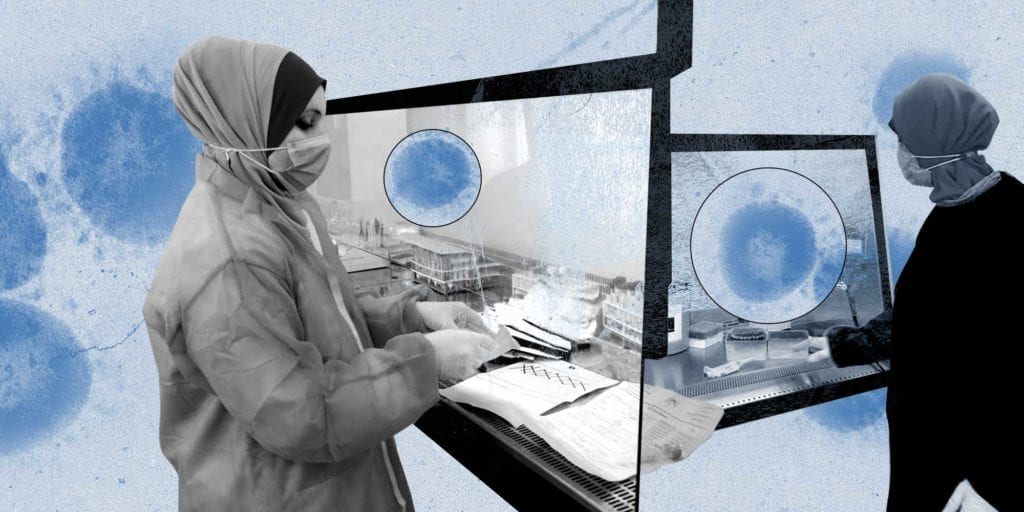 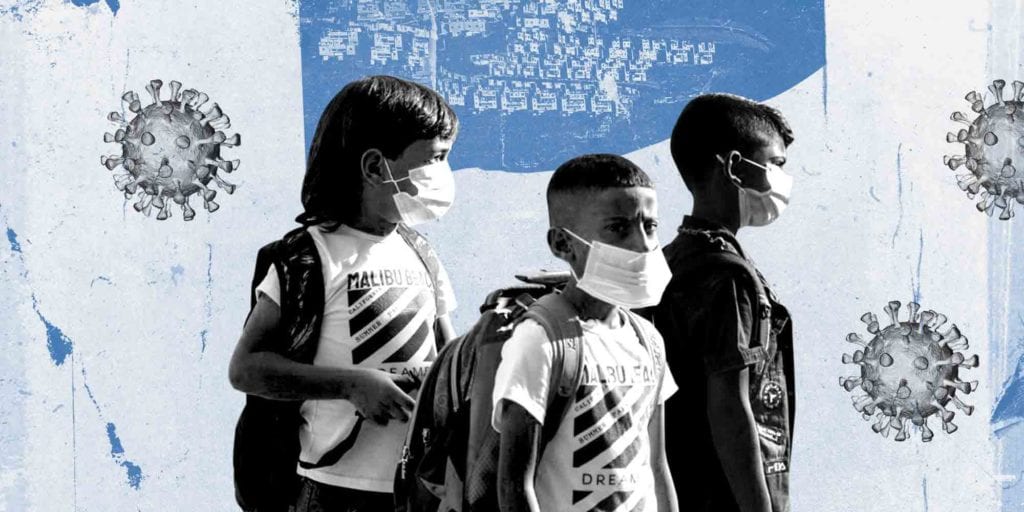 “The disease seems to spread more rapidly in winter, as there is a surge in infection rates across all governorates,” said Dr. Nobogh al-Awa, a member of the Covid-19 advisory board. “Alarmingly, it may cause a major outbreak. As we witnessed in summer, I expect a surge in the number of critical cases.”

So far, the number of cases is increasing, yet still  “under control.” These are generally moderate cases, most of which are quarantined at home and followed up by telephone. Only serious cases are referred to hospitals.

Al-Awa also told Daraj that conducting a Covid-19 PCR test requires a day or two to have the results depending on the number of tests made by the laboratories. While the Ministry of Health is not able to conduct tests for everyone, private laboratories ask for unaffordable fees. If a person cannot afford to pay for a PCR test, he or she will do an x-ray or blood test, as they are much cheaper.

There are 15 public hospitals in Damascus with a total of 3,483 beds, while the capital’s 36 private hospitals have a capacity of 1,298 beds, according to the Ministry of Health. Most people depend on public hospitals to get free medical treatment. Among the major hospitals to receive coronavirus cases are the Assad University Hospital, Mouwasat, Ibn Al Nafees and the Syrian Arab Red Crescent.

While public medical treatment is free, some patients are forced to go to private hospitals, as there are no longer vacant beds in public hospitals. They will pay at least 500,000 Syrian pounds per night ($200 in the parallel market), one patient told Daraj.

On October 12, 2020, the Ministry of Health opened an emergency hospital with a capacity of 120 beds in Damascus’ Al-Faiha Sports City to receive coronavirus patients, who have moderate symptoms and need respiratory support only. It has one hundred additional beds that can be used in times of need.

On November 16, 2020, Dr. Essam Amin, Director of the Mouwasat Hospital with  a capacity of 120 beds told a local media outlet that the number of coronavirus cases in his hospital had more than tripled in the first two weeks of November.

“The number of confirmed cases the hospital has received since the beginning of November has reached 53, while there were only 15 in October and 19 in September,” he said. “At its peak in August there were 172 positive cases in Mouwasat Hospital alone.”

“These numbers represent the cases that need medical treatment in hospital and range from severe to critical,” he added. “They represent only 15% of the total number of cases. Most are not referred to hospitals.”

According to Dr. Amin, Damascus ranked fifth in the number of Covid-19 cases in the country, while Homs and As-Suwayda are expected to rank first.

Atef al-Tawil, Deputy Director of the Department of Communicable and Chronic Diseases at the Ministry of Health, admitted that some governorates are witnessing a gradual increase in the virus, including Hama, Homs, Lattakia and As-Suwayda. He also told the Sana national news agency that hospital occupancy rates increased by up to 15% in some governorates.

Dr. Tawfiq Hasaba, Director of Preparedness, Ambulance and Emergency Department at the Health Ministry, confirmed there was an alarming surge in the infection curve since mid-November, when the daily number of infections reached 30 cases and three deaths. Currently, there are 150 daily infections and 15 deaths, which means a five time increase.

The same is true for Aleppo. “The number of patients in the emergency department is steadily growing,” said Dr. Ahmad (alias), a doctor in the department of chest diseases in the Aleppo University Hospital. “The hospital is at its full capacity. There are no vacant beds to receive more patients.”

“The hospital’s intensive care unit has only six ventilators,” he said. “If needed, we will use an additional ward with a capacity of ten rooms. Currently, the internal paramedic unit is receiving 20 patients suspected to have the coronavirus, compared to five to ten last month.”

People in the government-controlled areas of Aleppo suffer power cuts of more than 12 hours daily. For years they have been dependent on generators, despite the high cost. Worse still is the delay in receiving diesel allocations for home heating. According to Dr. Ahmad, people are moonlighting to be able to make ends meet in terms of food and electricity, and therefore pay little attention to the pandemic.

According to him, there are only 40 ventilators in all of the governorate’s hospitals, while the number of deaths at times reaches 10 to 20 a day. He furthermore pointed at the Health Directorate’s inability to conduct a broad range of swabs for all residents. Instead, cross-sectional imaging of the chest wall was done.

“For the past two weeks in Daraa, we have been dealing with 50 suspected corona cases daily, including deaths that we transferred to hospitals in the city,” said Osama, a volunteer at the Syrian Red Crescent. “The major prevalence is in the countryside. The Red Crescent is currently creating a new quarantine department with a capacity of 30 beds in the Daraa National Hospital.”

Seeing the alarming surge in coronavirus cases in several governorates under control of the Syrian government, the Minister of Health, Hassan al-Ghobash, issued a circular on November 29, 2020, which calls upon hospitals to stop performing non-urgent operations and only carry out emergency and cancer surgeries, to be able to increasingly focus on the coronavirus.

This report was carried out with the support of the International Media Support (IMS) and in cooperation with “Rozana” Media Foundation and the Yemeni platform “Khuyut.”