“Palestine is a Queer and Feminist Case!”

German media presented the demonstration as a violent, anti-Semitic gathering, in which protesters threw empty bottles at peaceful police and chanted ISIS slogans. Dutch and British media did the same, while the demonstrations in fact attracted all kinds of oppressed people: from Sikhs, Armenians and Kurds to feminists and queers.

You wake up to the news from all sides, friends and family, on WhatsApp. Instagram stories are blocked under the excuse of cruelty. And images and videos enter every detail of your life via Facebook, Twitter, Snapchat and TikTok.

A deep wound that you licked every now and then flares up. Meanwhile, you still have to deal with work, tax papers, corona and an upcoming curfew. Add to that: chest pain, shortness of breath, and anger!

You hear a massive demonstration of some 15,000 people is to take place in Berlin to denounce the Israeli aggression in Gaza and the forced displacement in Jerusalem’s Sheikh Jarrah, bringing together people of all nationalities, backgrounds, and political orientations in support of the Palestinian cause.

You leave your house and carry the protest signs you drew with friends. You go down to the train station passing the faces of passers-by who try to read what you wrote in broken German or English, such as “Stop ethnic cleansing in Palestine.” Immediately, they turn away from you.

Just the Palestinian flag in the corner of my sign prompts the beholders – except those heading to the demonstration – to raise their eyebrows, produce a cynical smile and, at times, greet you with a “shalom” and a laugh.

These people, with their provocative views and ready-made conclusions, assume the demonstration is against Jews and completely ignore the possibility you are demonstrating against discrimination, occupation and the systematic targeting of defenseless children and civilians.

When gathering in Oranieinplatz, the first thing you notice is activists distributing leaflets called “No to War.” As if going out on the street may spark a war between the two sides of a conflict in the distant Middle East, based on an ignorant orientalist view, and not on an aggression of a tractor army massacring people trapped in an open-air prison.

German police almost equal half the number of demonstrators, whose chants are interrupted every five minutes by the police announcing the rules regarding social distancing and wearing masks. Never mind that the vast majority of people complied.

Arab and German feminists and leftists, immigrants, and advocates of every nationality and ethnicity occupy the square and chant in English, German and Arabic. All kinds of flags are present: the flag of Palestine, the flag of the Syrian revolution, the Armenian flag.

On my banner I drew a rainbow flag and a Palestinian flag in one corner and in the other the text: “Palestine is a queer and feminist issue.”

I got many surprised looks. But it did not prevent the cameras from filming. Nor did it make those around me look at me with resentment. It was not important for me to tell anyone about intersectionality, for intersectionality was actually practiced here, on the ground, outside of academic research papers.

I lost my voice while cheering in Kreuzberg and Hermann Platz, with all the protesters chanting after me in English: “Free, Free Palestine.” It produced some consolation, a purifying childish kind of consolation, that my voice got hoarse.

Under the pretext of disruption, the police at the demonstration arrested several young men and threw tear gas at everyone.

I went home and started sharing facts, interviews, pictures and statistics on the Internet. I had tried to live with it, but today, the war and the incidents at and before the demonstration brought back a feeling of guilt, a feeling of guilt for trying to coexist.

German media presented the demonstration as a violent and anti-Semitic gathering, in which protesters threw empty bottles at peaceful police and chanted ISIS slogans.  Dutch and British media did the same with the demonstrations that attracted n Sikhs, Armenians, Pakistanis, Kurds, queers, feminists and all kinds of other oppressed people.

Yet, the Israeli “pink washing” machine has done its job, as some Korean friends wrote me and asked me how I could possibly join a demonstration in support of a country that denies homosexuals and women their rights. How do I tell them that Israel welcomes them to holiday on Palestinian beaches with Israeli names, claiming it is tolerant? How do I tell them about the Israeli blackmail of Palestinian gays and lesbians, and Palestinians in general, in the ugliest possible way? Where to start?

Instagram is blocking all content posted in support of Palestine. One friend in Gaza posted “God Bless” on Facebook yesterday and was killed today by a rocket-propelled grenade. My voice gets hoarser. My neighbor in the neutral Australian residence tells me: “Relax your voice, don’t talk.”

But my family and I do not have the luxury of fasting when it comes to truth. I speak today and I do not care. I work on a project, fill out my tax papers, try not to think about the survivor’s knot, prepare to go out another nearby demonstration, follow the news and breathe a long sigh of relief every five minutes, while sending links documenting the crimes of the occupation to all my European friends.

As I walk from East to West Berlin in one long breath, I repeat to myself: “Palestine is my case! Palestine is a queer and feminist case!” 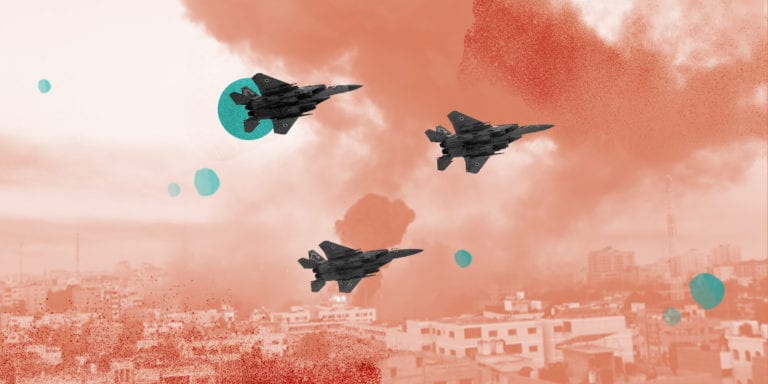