Sheikh Yacoub entered the Cairo Tora Court complex as a witness and was about to leave as either a terrorist or a traitor to his fans. He chose the latter. “I don’t know anything about Salafism,” he said.

Mohamad Hussein Yaqoub, one of Egypt’s most influential and extremist Salafi sheikhs, who spread the Salafi word around the world with his sermons on cassette tapes and on TV, is currently being heard in court in the ISIS Imbaba case, in which 12 individuals stand accused of a series of terrorist attacks.

Sheikhs such as Yaqoub started to appear in the 1980s under the reign of former President Hosni Mubarak, who supported the Salafist movement with the aim of creating a rival, and perhaps an alternative, to the Muslim Brotherhood founded by Hassan al-Banna.

Under Mubarak, the number of sheikhs rapidly multiplied, each with an even more radical approach to religion. Yaqoub was arguably the most prominent, and the cruelest. He advocated the predominance of religion in virtually everything and called for the establishment of an Islamic state.

One day, a group was formed that carried out a bombing in downtown Cairo, targeted a bank in Giza, and participated in other terrorist operations. According to case papers “271 of 2021,” the group had pledged allegiance to ISIS and operated under the name “ISIS Imbaba Cell.”

Following their arrest, the group members did not hide the source of their ideas. They said they were students of Sheikhs Muhammad Hassan and Muhammad Hussein Yaqoub. They had adopted their ideas after hearing them in fatwas and sermons performed by the two Salafi Sheikhs. The same sheikhs whose influence spread after appearing on the famous “Al-Nas” TV channel, who did not come to the rescue of the seven defendants who fell into the hands of the Egyptian security

Perhaps the defendants had hoped for the two sheikhs to storm into the courtroom and prove, with evidence from Qur’an and Sunnah, that the acts for which they stand trial were nothing but “orders from God” to reconstruct the universe and implement divine law on earth.

But none of that happened. Despite being summoned, Sheikh Muhammad Hassan missed the first court session and he submitted a medical report to excuse him from attending the second session.

Seated in a wheelchair, Sheikh Hussein Yaqoub entered the courtroom, only to take back most of the statements he’d made in the past, and renounce the accused and their ideas. He even proclaimed that he was not a scholar but merely a reader with “a teacher’s diploma.” In response to the defendants’ plea that they were his “disciples,” he said: “They are not my students and I do not know them.”

In other words, Sheikh Yaqoub decided to jump ship as soon as felt the heat, disavowing his followers, faith and Salafi ideas.

His “martyrdom” widely echoed in the religious circles that had witnessed his emergence and had listened to his cries and fatwas live on air to compel Muslims to abide, warning them of the torment of hell’s fire, the wrath of the snake, the horror of the hereafter …

He was the first to advocate and support the foundation of a religious state in Egypt. In one of the referendums after the fall of the Mubarak regime in 2011, he appeared with his now famous slogan: “And the Voter’s Boxes Said to Religion: Yes.”

The referendum of course meant nothing more but a fight between two political factions, one of which supported the new constitution proposal, while the other rejected it. The political Islam faction, to which Yaqoub and his companions belong, was mobilizing to approve the new constitution, arguing it to be “halal,” while claiming that the old one would be considered “haram” (forbidden).

The religious forces at that time formulated multiple narratives revolving around the position that approving the constitution was a religious victory bringing Egypt closer to God, making it a state in which Sharia prevails. Rejecting it would make Egypt a hostage to the liberals, secularists and “the enemies of religion.”

“People said ‘yes’ to religion and ‘no’ to secularism,” said Sheikh Yaqoub. “This is our country, and whoever does not like it can emigrate.”

His words were a warning alerting everyone to the extremism of the Islamic movement, the Salafi sheikhs, and the path they embarked on in an attempt to turn Egypt into a religious state. Disregarding the country’s cultural and political history, their statements and fatwas piled up, until they became one of the main reasons for the Islamic trend to fail.

Return in a White Robe

Mohamed Hussein Yaqoub was a sheikh who inherited the call from his grandfather and father, one of the founders of the “Sharia Association for the Cooperation of Workers in the Book and the Muhammadan Sunnah.” He was born and raised in one of the most conservative areas of Greater Cairo.

Because he was a sheikh, he regularly traveled to Saudi Arabia to visit sheikhs and attend religious councils in the Kingdom, especially during the period of the revival of Wahhabism. He mainly obtained his Islamic knowledge from students of Muhammad Abd al-Wahhab.

He returned to Egypt in a white robe with a long beard, like an old man the Saudi way. He started giving sermons in mosques and recording his voice on tape complete with “sound effects” of him crying or being frightened. Many of his tapes became bestsellers. With Sheikh Yaqoub a whole new generation of bearded young men, book and tape sellers emerged. He became like the “godfather of the Gulf Islam,” which spread in Egypt with the return of Egyptian workers from Saudi Arabia, the Emirates, Qatar and Iraq in the 1990s. He was the right man at the right time in the right place.

Unsurprisingly, everything he once proclaimed seems to be bouncing back at him. He once issued a fatwa banning Television, only to suddenly appear on satellite TV channels to spread his faith. He claimed never to speak about politics, yet forbade demonstrating and rebelling against the Mubarak regime even during the outbreak of the 2011 revolution.

He asked people to be humble and grateful, yet drove the newest car models and never walked around without a small procession. He would extend his hand for followers to kiss, and there are reports claiming that he got married no less than 22 times

Most Salafi sheikhs in Egypt stay away from calling for jihad in public in order not to get involved in explicit accusations of terrorism, and it is not possible to find fatwas by Sheikh Yaqoub that incite terrorism or promote jihadist ideology, as he was always keen not to be caught the wrong way.

However, some of his fatwas did declare that Coptic feasts are “taboo,” celebrating Valentine’s Day is a “sin,” working in banks is “cooperating with sin and aggression,” falling in love a “sin,” also, singing as “forbidden” and jihad “a calling and legitimate duty,” without clarifying exactly what he meant by jihad.

In addition to the slander targeting many segments of Egyptian society, Sheikh Yacoub glorified the sheikhs and founders of terrorist organizations, as well as those carrying arms.

Sheikh Yaqoub in his Own Words

Yaqoub’s statements at the ISIS Imbaba trial raised many eyebrows, not only because they were simply strange, but also because they contradict what the man has claimed and preached for many years.

“I am not a scholar,” he said in court, while the title of his program on the Al-Rahma channel was “The Scholars Council.”

He stated that he was neither a mufti nor worthy of fatwas, yet his tapes and many hours on television every single day almost drowned in the number of fatwas, often responding to viewers’ requests for advice.

He vilified Muslim Brotherhood founder Hassan al-Banna and claimed his goal was to gain power, and that “we must not follow a person or group except the Prophet.”

Yet, his followers mentioned that the “Battle of Funds,” was an alliance between Salafist TV channels and the Brotherhood. Moreover, he gave the Brotherhood his political support before they came to power, after Mohamed Morsi assumed the presidency,  and even after his removal.

On July 2, 2013, Yaqoub called on the Egyptian people to mobilize “in support of legitimacy,” and he signed the statement of the Shariah Commission for Rights and Reform in support of the Brotherhood.

Following the (police) violence that ended the Rabaa sit-in, he publicly defended the Brotherhood and considered the brutality against them a war against religion. He accused the media of inciting passion for “the immoral who brainwashed Egyptians day and night” and extended a hatred of the Brotherhood to “a hatred of religion.”

Yaqoub’s testimony also included his disavowal of politics. “I have nothing to do with politics and do not belong to any party or group,” he said, even though he was a member of the Salafi Ulama Shura Council, which backed the Brotherhood and issued many political statements.

The council commented on events and mobilized for demonstrations. Sheikh Muhammad Hassan even resigned in 2012 “to keep away from entering the political fray.” The council of scholars was a political entity that included Salafi sheikhs, some of whom participated in demonstrations. So how can Yacoub claim he has nothing to do with politics?

In his testimony, Yaqoub even disavowed the Salafists, claiming he was not a Salafist.

“I do not know anything about Salafism,” he said. “I am Hanbali.”

However, in one of his old recordings he had said: “I am honored to be in the midst of the Salafi Da’wa school. I was raised by its sheikhs, I learnt from their books, and from their tapes, and from their words, and from their directives … Yes, my brothers, they are my origins and my identity, and to them my heart longs.”

He added in the courtroom that he was not a mufti qualified to issue fatwas, but a graduate of the Dar Al Uloom College. Yet, his cassettes are full of fatwas against singing, shaving beards, falling in love, dealing with banks, working in the banking sector, and many, many more.

Yaqoub also avoided talking about Sharia, claiming he lacked the knowledge, and said he did not know the meaning of the concept of “the abstaining sect,” (a concept used by many clerics and pious men to condemn those who pick and chose rules to follow in Islam, as opposed to being committed to every law mentioned in the Qur’an. It’s also used to condemn states that separate religion from the constitution).

“It’s the first time I hear about this term, and I know nothing about it,” he said, despite the fact that he has given entire lectures with titles such as “the dream of implementing Sharia” and “Sharia above the constitution.”

The question is: how on earth can a man, who has produced thousands of hours of religious instruction, filled whole programs on Islamic jurisprudence, and lectures on sensitive issues, claim he’d never heard of “the abstaining sect?” 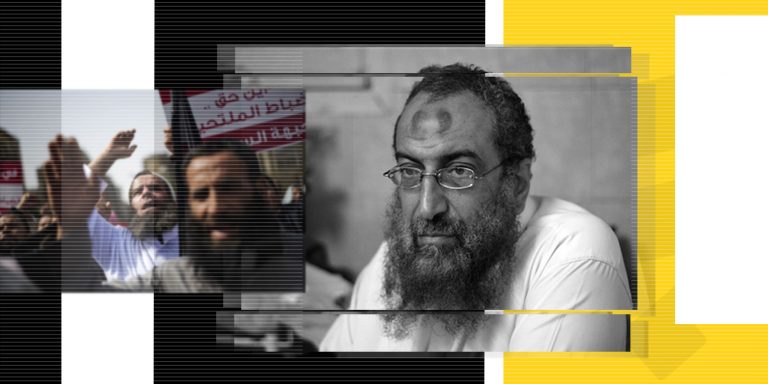