Snap Parliamentary Elections will be held in Armenia on June 20. Will anything survive from the promises of the 2018 peaceful revolution?

It was only three years ago, but it already looks so far away. In Spring 2018 thousands of young and less young Armenians took to the streets demanding change. They reject the maneuvers of former president Serge Sargsyan to stay in power for an unconstitutional third mandate.

The event was exceptional: not only by the extreme civility of the protest movement, non-violent but also joyful, as if already celebrating a better future. The fact that the ruling administration did not open fire on the demonstrations made a non-violent revolution possible.

The event was amazing if one considers the broad context of 2018. To the east, Azerbaijan had settled into a “republican dynasty” with Ilham Aliyev inherited the state from his father in 2003. To the west, a Turkey with Erdogan in power also since 2003, becoming harder since the failed coup of 2016. In the north, Vladimir Putin has been in power since the year 2000. To the south, the Islamic Republic of Iran had expanded its power across the Middle East, only to be regularly contested by internal discontent.

The world of 2018 was one of rise of populism and nationalism, where Donald Trump led the self-declared “free world”. It was in such a context of reaction that the Armenian “Velvet” Revolution took place. “In an international atmosphere hardened under nationalist populism and militaristic discourses, a peaceful regime change in Armenia is a welcoming fresh air”, I wrote in Agos back in 2018.

Little did we realize how difficult it was to preserve pro-democratic agenda in a time of global right-wing populism and cynical realpolitik. After a decade of Sargsyan’s rule, where people were tired of stagnation and corruption, there was finally a “happy” mood in Yerevan. Soon, that “fresh air” was polluted by external circumstances: a war launched by a coalition of autocracies seeking new legitimacy by unleashing nationalist instincts.

The 44-day war led to the killing and maiming of thousands of young recruits. Armenia, abandoned by its ally Russia and ignored European democracies, suffered a crushing defeat. The happy mood in Yerevan is now gone, instead there is a pressing sadness, one of mourning for lost sons.

Armenia is heading to snap elections on June 20. There is little hope that the promises of the 2018 Revolution will be maintained. Many in Armenia ask whether the war and the defeat was the price they paid for their dreams of a better future, and whether it would be better to have autocratic rule that promises instead security and stability.

The promise of democratic change in Armenia has-been betrayed. It was molested by autocrats who did not hesitate to unleash a merciless war. It was abandoned by Russia, Armenia’s military ally, which tolerated a war against it for 44 long days. It was betrayed by a Europe interested in its mercantile interests and bank accounts, and indifferent towards democracy to its eastern borders.

It was also betrayed by the administration of Nikol Pashinyan who came to power in 2018: not only they did not manage to handle Armenia’s external relations, and failed to decrease risks of isolation and danger of war, but also they revealed to be unable to make the necessary internal reforms.

Their failure is largely because the Pashinyan administration quickly cut-off its decision-making process from the broader social movement that made the 2018 revolution possible. “La démocratie, c’est moi!” was the populist answer of Pashinyan.

Today, Pashinyan has little to promise on the way of reforms. Not only is he weakened by the defeat and his powerful internal enemies emboldened, but also he has lost the support of the urban, educated middle-class, those who brought him to power, but now feel bitterly disappointed. Pashinyan’s popular support comes from the provinces and by the popular classes, who see him weak, yet prefer the alternatives. Without the support of the civil-society Pashinyan has little chances to succeed in reforms.

While there are over two-dozen political parties competing in the elections, the serious challenger is Rober Kocharyan, the second president of Armenia. Kocharyan promises security, to limit Western influence and especially that of “Soros”, and closer cooperation with Russia. He has also promised to return Hadrut and may be Shushi through negotiations, although never explained how. The fact that Pashinyan remains in power after a painful military defeat, witnesses how unpopular Kocharyan and his nationalist allies are inside Armenia.

The events since 2018 revealed a strong desire in Armenia for reforms, to fight oligarchic corruption, and for a fair electoral process. In spite of the tense political atmosphere, at times harsh verbal attacks, there has been no violence during the electoral campaign. That a democratic process is taking place is an outstanding situation in that entire region, with the single exception of Georgia.

It is less important who will win from the 2021 elections; it is more important to have a parliamentary system where next to the ruling group a strong opposition emerges. It will be the first step towards a political process, towards the establishment of checks and balances.

The events of the last few years also showed that there is yet another obstacle in front of democratization in Armenia: the unreformed state administration inherited from the Soviet times. For three decades leaders refrained from tackling it. Without its modernization, neither the question of democratic participation, rule of law, corruption, or numerous other failures that were revealed in 2020 will be addressed.

Those reforms will not be achieved by a small group of people coming to power, who eventually have the state bureaucracy at their disposal. Only a sustained pressure from “below” from what we call “civil society” will bring much needed reform to an obsolete bureaucracy and public administration. 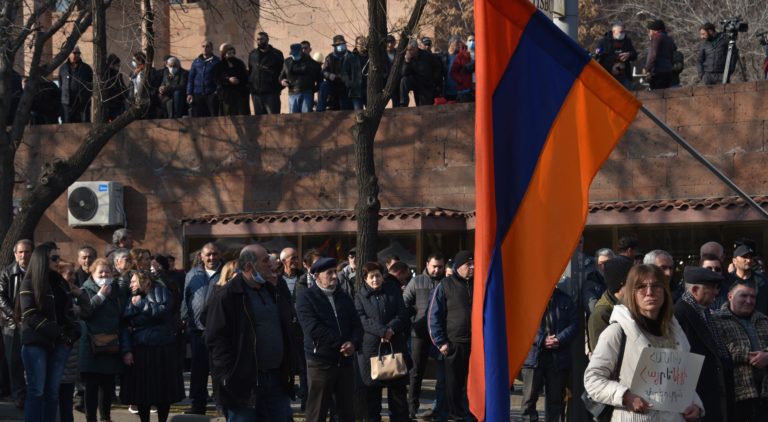