Lebanon: How Did 300 Iraqi Antiquities End Up in the Nabu Museum?

Iraq has recovered some 300 artifacts from the Nabu Museum. Yet, it remains unknown how they ever got there. Likewise the fate of thousands of other stolen pieces remains unknown. The 17,000 artifacts that were recently recovered from the US only illustrate the massive scale of the disaster that has befallen upon the cultural treasures of ancient Mesopotamia.

“The Nabu Museum is trespassing on public land,” Mohamed Ayoub, executive director of Nahnoo, a NGO campaigning for the Lebanese right to public space, told Daraj. “It is encroaching onto the street and railways. That is: on state property. It also forms a barrier to reach the sea, and therefore is a violation of Environmental Law 444.”

Built by three businessmen and friends in El Heri, some 60 kilometers north of Beirut, the museum was opened in 2018 to, according to the website, “provide a tranquil space for the preservation and creative pursuit of art and culture in a region of seemingly constant turmoil and strife.” Inaugurated in 2018, the museum offers a mix of both contemporary art and ancient artifacts.

Ayoub provided Daraj with documents that confirm his claims. Internationally known Iraqi sculptor Dia al-Azzawi contributed to the design of the museum. Two of his giant, precious and beautiful sculptures were displayed at the museum’s entrance.

The question is: how did Iraqi artifacts reach the Nabu Museum in north Lebanon?

The question is valid for many reasons. This includes the fact that the museum is owned by a very public family. Zeina Aker was Minister of Defense in the Hassan Diab government. Her husband, Jawad Adra, is the founder of research firm Information International and one of the museum’s owners.

His name has appeared as a minister in a number of cabinet formations. This means the museum owners should be able to explain to both the Lebanese and the Iraqi public how they acquired more than 300 Iraqi antiquities, including, according to Iraqi sources, cuneiform tablets.

Daraj sent an email with questions to the Nabu Museum to find out how it acquired these pieces, the dates of their acquisition, and whether it possessed documents proving they were legal. The museum, however, did not reply. As for the Iraqi Ministry of Culture, it has not been able to uncover how the Nabu Museum acquired the antiquities. Iraqi Minister of Culture Hassan Nazim preferred not to go into the matter when Daraj asked him about it. Lebanese Minister of Culture Mohamed Mortada, who is supposed to work on the objects’ extradition to Iraq, did not want to reply either.

Verifying the route that brought the Iraqi artifacts and tablets to the Nabu Museum on the beautiful beach of Chekka may lead to finding out the paths by which Mesopotamian antiquities were smuggled during war and times of trouble over the past five decades.

Iraq has over 20,000 archeological sites, most of which were violated during the many years of conflict, starting with the Iran – Iraq War and ending with the war against ISIS. Except for the most famous sites, most are still not adequately protected today, and thus remain vulnerable to theft. In 2021, Iraq succeeded in recovering 17,000 artifacts that had been smuggled to the United States following the 2003 invasion of Iraq.

“Iraqi antiquities are scattered all over the world,” said Hassan Nazim when we asked him if his ministry had investigated who had provided the Nabu Museum with antiquities.

It is certain they are Iraqi due to the unique Mesopotamian style, whether they are Sumerian, Babylonian, Akkadian or Assyrian. The Nabu Museum recognizes their “Iraqiness.” That is why it responded when Interpol asked about them, after being reluctant to do so when the Iraqi authorities submitted a request to return them through the Iraqi embassy in Beirut.

How did Iraq find out about its archeological treasures displayed in Chekka in the north of Lebanon? According to Iraqi Culture Minister Nazim, Lebanese friends of Iraq informed the ministry. Restoration negotiations started in June 2020, when an Iraqi delegation arrived in Beirut. It included experts from the ministries of culture, justice and foreign affairs, and representatives of the Iraqi intelligence agencies. They verified the identity of the artifacts. The Lebanese ministry of culture took part in the negotiations.

“We didn’t pay a penny,” said Nazim. “We are entitled to these pieces. All we have given in return is to extend the period of displaying these pieces in the museum by six months.” “Iraq has the right to demand compensation, especially since the cuneiform texts were used and translated by the museum without our permission, and without protecting our rights,” he added.

The value of the Nabu pieces mainly lies in the texts written on them, according to Nazim. He refused to comment on his meeting with Zeina Aker when she visited Iraq as minister of defense in November 2020. She met her Iraqi counterpart Jumaa Saadoun and visited the Iraqi Ministry of Culture.

Nazim explained that one of the most prominent ways to smuggle Iraqi antiquities out of the country is by air via Dubai and Doha. And from there onward to Europe and America. The shipments are generally classified as “ceramics.”

Nazim also pointed out that Iraq has launched numerous campaigns to seize and restore looted antiquities through bilateral agreements with its friends in the Gulf. But it is unlikely the artifacts in the Nabu Museum followed that path. It is hard to know exactly how they arrived in Lebanon, unless the museum tells us.

“The previous Iraqi governments avoided negotiating with thieves,” said Nazim. “I decided to negotiate with them. And this is what made us succeed in recovering 17,000 pieces from the US.”

Smuggling During years of turmoil in Iraq, the country witnessed multiple smuggling operations of archeological resources by both air and land. Lebanon was one destination.

A search in the newspaper archives unearthed a number of them, including an operation thwarted by Lebanese customs in Chtaura near the Lebanese-Syrian border in October 2008.

Custom officials seized 57 Iraqi artifacts in the car of a Syrian citizen named Mohamed Adnan Hassan Al-Mutlaq. The pieces, according to the investigation, were Sumerian and Babylonian, and included cuneiform inscriptions and pottery.

Note that Iraqi Minister of Culture Nazim told Daraj that the pieces recovered from the Nabu collection include tablets with cuneiform inscriptions. Reading the minutes of the investigation and the interrogation of Mutlaq, which was written by the financial public prosecution unit, led us again to the Nabu Museum.

Lawyer Carol Al-Rassi, who worked at the time for the museum’s owner Jawad Adra, told Daraj that her client had specifically asked her to follow up on the case of Mohamed al-Mutlaq, seeking to get him released. “On October 29, 2008, I was assigned by Mr. Jawad Adra to seek the release of Mohamed al-Mutlaq from prison, after antiquities had been seized in his car,” she told Daraj.

Although knowing the man had smuggled antiquities, Adra had told her that what had been found in Mutlaq’s car were decorative and counterfeit antiques. And she had been convinced by that.

According to the investigation report, the arrestee and seized objects were handed over to the International Crime Prevention Office of the Internal Security Forces. Iraq may have recovered its artifacts from the Nabu Museum, but the fate of thousands of other pieces remains unknown. The incident of recovering 17,000 artifacts from the US only illustrates the massive scale of the disaster that has befallen onto the archeological wealth of ancient Mesopotamia. It also illustrates the scale of corruption that rules Lebanon … 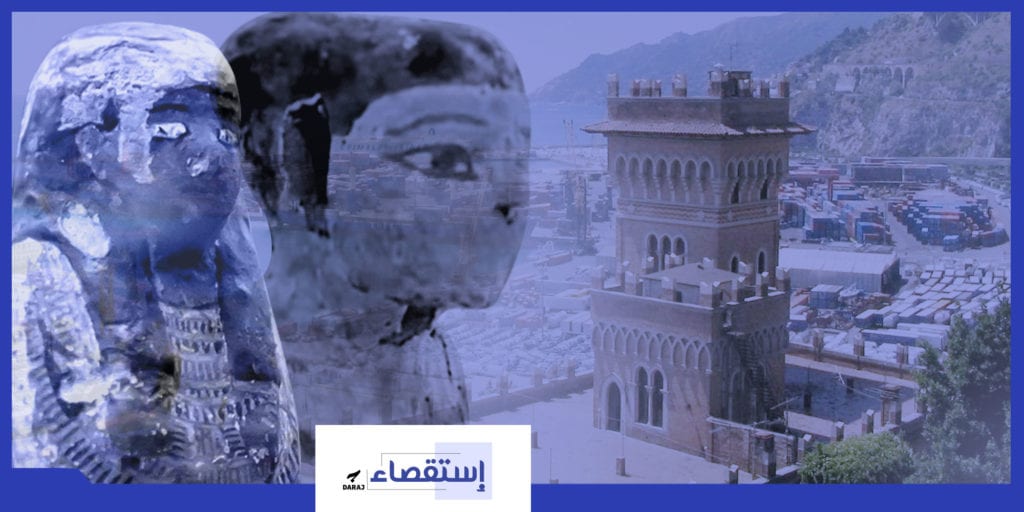