Lebanon: Music as a Reflection of the Political Turmoil

Throughout history, music has always been a reflection of the political or social movements, and Lebanon and its recent uprising is no exception. Yet after the demonstrations came to an end, what is left of revolutionary music? What can music bring in a country where hope seems to be lost for a youth heavily betrayed by its political cartel?

Lebanon is deeply immersed in one of the biggest crises of its history, and has recently been ranked second least happy country in the world by the World Happiness Record. The mismanagement, corruption and looting from the government for the past years, as well as the political confessionalism brought nothing less than the collapse of the financial system. Add to that the blast of the Beirut port on the 4th August 2020, and the COVID pandemic and one can start to imagine the situation the Lebanese are living in. Even the uprising that started on the 17th October 2019 until 2021 could not change anything. So, among all this misery, does music still have a purpose?

“The Lebanese lost hope” is a statement that can be heard everywhere across the country. Is it also the case for the artists? What can music bring to a disillusioned youth? Chyno with a why, a Lebanese rapper, believes that music still plays an important role as it can help to “reduce pressure and stress”, in addition to “empower young people that do not fit in the society.” This power to rise is the main theme of his last album «Mamluk». Rapper, producer, manager and cofounder of many rap institutions, he is one of the front figures of the rising hip-hop scene in Beirut, which is currently very active, with a lot of concerts and events going on.

The scene is proof that music still lives in Lebanon, and if the social and economic situation continues to deteriorate, music can showcase a whole generation of talented artists. This is one of the motivations that keep artists going. It is also the case for Dahlia on the Run, a pop/folk artist, who says: “if my songs can trigger at least just one person, then the job has been done. If it can bring hope, it can show Lebanese people that there are active and talented people out there still seeking change”.

Like a lot of artists, Dahlia believes music might act as a new type of resistance, after the uprising, helping people on a day-to-day basis, as well as trying to spread hope.

For Bu Nasser Touffar, this effect remains what counts the most: “when you feel that you are in a world where you have no affiliation, a song comes to make you feel that you are not alone, that your anger and tragedies are visible and expressed,” and shared by other people. Bu Nasser Touffar is a rapper addressing social and political issues, and a good example of the role the music played during the protests that started on the 17th of October 2019. Many of the rapper’s songs were used as anthems during the demonstrations.

Music During the Uprising

Music went hand in hand with the uprising. The marches were cadenced with traditional revolutionary songs, patriotic anthems but also more recent genres like techno or hip-hop. Artists played their part during a time that felt like «an intense momentum of hope and will, similar to teenage days» explains Dahlia, whose song «Beirut», an ode to Lebanon in all of its aspects, was released during the protests.

Many artists emerged from the revolution, «the situation helped the artists create, and their creation was part of the historical event» according to the media LbHipHop, covering the underground Lebanese hip-hop scene.

Being revolutionary by nature and historically the voice of the youth and the left out, hip-hop quickly became one of the most popular genres during the uprising, with songs of artists like El Rass or Bu Nasser Touffar. For the latter, “the revolution justifies the existence of this kind of music”.

Many of the rapper’s songs were used as anthems during the demonstrations.The protests were echoing a will for change that was already overflowing in many of his songs: “the revolution has always been present in all my texts, both lyrical and written. Every effort I made and every word I wrote or sang was pouring into this peak moment. For me, the revolution was a dream that I instigated myself and those around me who had heard me for years.”

The 2019 uprising was the climax of a boiling society fed up with its leaders and “lies never absorbed since childhood.” Khaled Soubeih is the leader of the band Al Rahel Al Kabir. The satirical tone of the songs of the group found an echo during the protests. Especially «Kellon ya3ni Kellon» (all means all), chanted as a slogan since the first days. “We knew that something was going to explode,” he says.

As demonstrated by the Lebanese uprising, music is an essential aspect of the revolution. The young rapper Jamul sees in art an explanatory role: ”it highlights the message. It provides a framework to show the way, a notebook. It is not only a song, it is a framework.” His lyrics are often tinted with political references, in order to awaken a political and social awareness. Jamul strongly believes that music, specifically hip-hop, plays the “role of the bridge between the masses and the institution, here the concept of change, to give the masses an explanation of what is happening in a tangible way”.

Although music accompanied the protests and maybe even fueled them, yet it did not lead the marches. Thus, while its impact must not be overestimated, it must also not be underestimated as it helped turn feelings of frustration in the current system and willingness to induce a positive change, into words, lyrics and songs that reflected the essence of the uprising and were jointly chanted all over the country and across the sectarian and geographical boundaries that has always been divisive.

A Deep Connection Through History

In fact, Lebanese music always had a close relationship with its political context. The most prominent example remains the Civil War and its aftermath, being recurrent themes in national music production, but also in fine arts, films or literature.

Even some members of the current generation of artists who have not witnessed the 15 years of violence during the civil war still reflect the war in their art, as its trauma and repercussions still reverberate till this day and were transferred from one generation to the other.

A lot of the lyrics of «Beirut» from Dahlia on the Run refer to childhood traumas at the times of the war. Music reflects and documents the divisive and frustrating events in the history of this country, and in this case, according to Dahlia, it can play a therapeutic role to cure the childhood traumas among the Lebanese, and help them communicate their concerns and overcome their fears.

Even if the Civil War can be viewed as an era of devastation, destruction and decay, it did not prevent the rise of the national musical creation, with a growing interest in Arabic pop, and the fusion of the styles from across Europe and Middle East, reflecting the diverse and complex identity of Lebanese society.

Khaled Soubeih deplores the failure in creating a rebel artistic scene yet, unlike the era of the 70s-80s, that saw the rise of revolutionary artists like Ahmad Kaabour, Marcel Khalife and Ziad Rahbani. “These artists contributed to set up a Lebanese revolutionary idea and now, as an artist, I feel I am an orphan missing a revolutionary reference.” Can the recent uprising help trigger new political and social discourses in singer’s lyrics, or did its aftermath kill the hope of even the most optimistic musicians?

What Role Does Music Play in Post-Uprising Lebanon?

If the protests that shook Lebanon were aiming at a radical change, the excitement and the hope running through the ranks of the population of all ages turned into more exhaustion and despair when seeing the crisis lingering, immersing the country in even more difficult times.

People no longer flood the street, and there are no speakers blasting music to accompany the chants of the protesters.

However, despite all the frustration and disillusionment that the Lebanese are feeling due to the economic crisis and the stagnation, yet there is still some sort of hope shared, and this is evident with the liveliness that still characterizes the streets of Beirut.

While the uprising did not reach its objectives in creating change in the rigid political system that has occupied the state after the war, the revolution succeeded in bringing people together.

Divided across sectarian lines, Lebanon always had a fragile stability. However, the uprising shed lights on a big chunk of the Lebanese population that looks beyond tribal and sectarian divisions. Among those are artists who have been singing for the Lebanese as a whole, regardless of their religious affiliations.

Lebanese are now beyond the “fake, groundless speech about the national unity among the Christians and Muslims and the great history of Lebanon, that neglects the traumas of the Lebanese people, and does not tackle the origin of the problem. Now we surpassed that, the speech is different. We are one people because we endure the same misery,” says Khaled Soubeih. This awareness is reflected among artists and in their music as Chyno also contends: “rappers here are already outcast of their community, so they are not going to make rap songs about political parties, they are going beyond that.”

In the end, music definitely still has a purpose, now more than ever, and the hope and the collective path that a lot of artists are praising can be the first stepping stone to a brighter future for Lebanon. As Dahlia says: “the sense of community that is emerging in Lebanon paves the way for something very beautiful, I hope.” 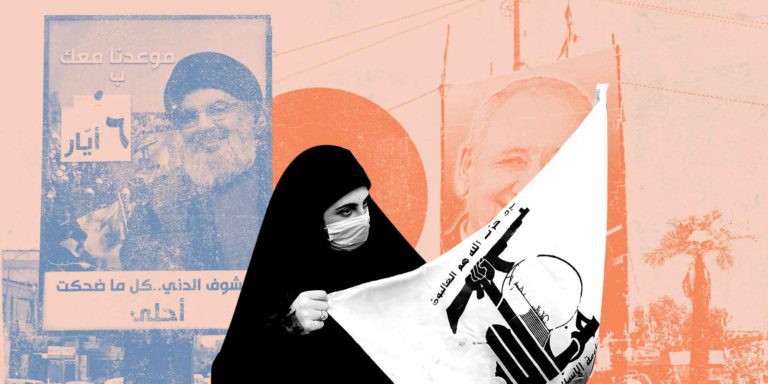